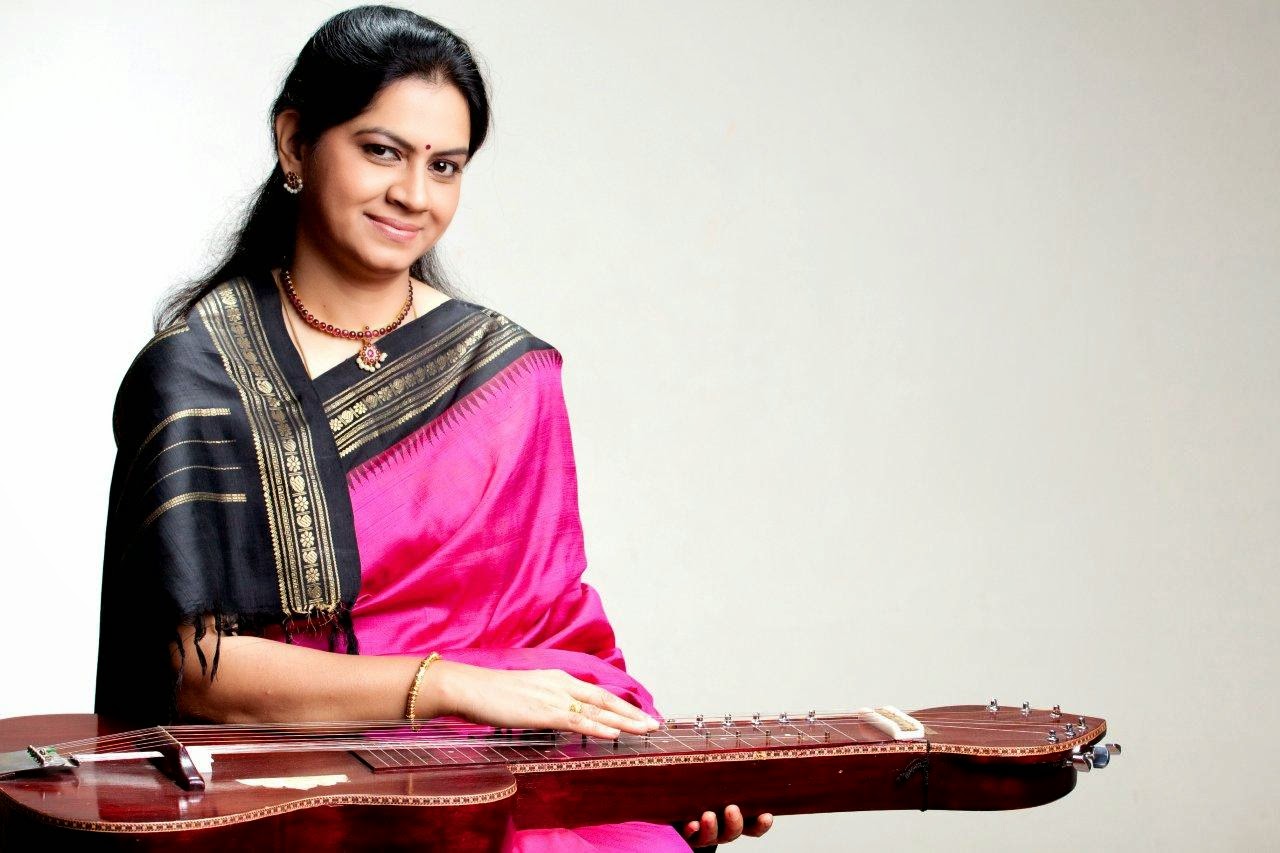 Dr. Kamala Shankar, a renowned exponent of Indian Classical Guitar has enthralled the world through her immaculate and melodious rendition of music. She is known for her tremendous control and versatility along with depth on her instrument. She has an exceptional and natural ability to play the ‘Gayaki Ang’ style on her Shankar Guitar. Dr. Kamala is a prodigy of Indian Music and has performed in India and abroad. She has improvised her art at every level. She has made a place of her own among the group of established artists and achieved the record of being the first lady Guitar Artist with a Doctorate on the same.She has been awarded the prestigious “Rashtriya Kumar Ghandharva Samman 2009-10”
Dr.Kamala Shankar was born inTanjore (Tamilnadu) and blossomed in Varanasi. At the age of 4 she was initiated into vocal music by her mother.At the age of 6 she was put under the guidance of Guru Pt. Amarnath Mishra of Varanasi to have extensive study in vocal for 6 years and completed her Sangeet Prabhakar.Later on Kamala Shankar picked up Hawaiian Guitar at the age of 12 and vocal training helped her in learning the instrument with ease. Her initial training of Guitar started with Dr. Shivnath Bhattacharya of Varanasi and was given valuable guidance by Guru Padmabhushan Pt. Chhannulal Mishra Ji (Kirana Gharana) of Varanasi and then from Pt. Bimalendu Mukherjee for few years.. She completed Sangeet Prabhakar, Sangeet Praveen in Guitar from Prayag Sageet Samiti Allahabad and Doctorate under Dr. Gopal Shankar Misra from Banaras Hindu University. She is a regular Artist from A I R and has performed for many National Programmes of Music & Sangeet Sammelan of Akashawani & Doordarshan.Besides music she has a Bachelor's degree in Zoology.
She got admitted to Master’s also and got selected in Dental Science but could not join because of her passion for music was too much a part of her soul and an obvious first choice. She has been awarded fellowship in the field of music by the Ministry of Human Resources Development, Govt. of India, "Surmani" from Sur Singar Samsad Mumbai, Kalashree Samman by Journalist association, Saraswat Sammaan by Mehta Nyas Samooh Varansi (U.P.) In the year 2013 April Dr.Kamala has been awarded with the most prestigious Rashtriya Kumar Gandharva Samman of 2009-2010.
She has been sponsored by Rotary International for group study exchange tour to various cities abroad, notably New York, San Antonio, Dallas, Austin, Houston, Fredericksburg and London.She has many music albums to her credit from H.M.V. (R.P.G.) as "Music Melody on Hawaiian Guitar”, Jhankar Music Company as "Rich Heritage", and Mystica Music Company as "Tantarang" etc.
She has participated in many music festivals like Uttar Pradesh Sangeet Natak Academy, Sangeet Natak Academy New Delhi, SCZCC, NCZCC, Taansen sangeet Samaroh, Sawai Gandharv Sangeet Samaroh, Soorya Festival, Taaj Mahotsav, Narad gaan Sabha, Ganga Mahotsav, Sankat Mochan Festival, Goa Kala Academy, Spic Macay Series throughout India etc.She performed in various countries like Singapore, Hungary, Austria, France, Dubai, Abudhabi, Muscat, Doha, Switzerland, U.S.A. and U.K
Artiste Profile