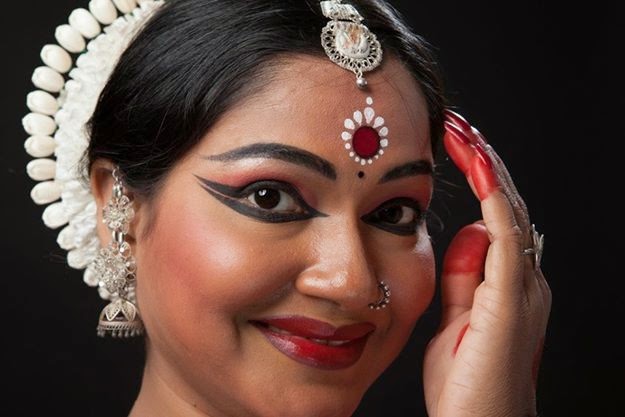 Janhabi Behera began her formal training in Odissi dance in 1991 under the guidance of Guru Shri Yudhistir Nayak and Guru Ramesh ch. Jena of the Orissa Dance Academy and later under Guru Shri Gangadhar Pradhan and Smt. Aruna Mohanty.  Blessed with a tall, slim and lissome figure, Janhabi excels in the intricate technicalities of Odissi Dance. Her swift and agile movements, sculpturesque grace and expressive eyes have made her a danseuse among the very best.
A recipient of many awards and accolades, prominent among them being the Sringarmani title from Soor Sringar Samsad, Mumbai, she has also received the Senior National Scholarship from Ministry of HRD, govt. of India. With rich and varied experience of having performed across the length and breadth of the country, she has been to Japan as a soloist and to North Korea for the 20th Spring Friendship Art Festival.
Her perfection in Odissi dance, through supple and graceful body movements and expressive facial expressions, reflects her mastery in this art form. Janhabi has participated in several lecture-demonstrations led by her Gurus. She choreographed for Doordharshan Kendra in Bhubaneswar, Orissa. Since 1998, Janhabi has served on the board of the National Festival of Dance Drama. In January 2010, Janhabi Behera performed a sterling duet with Biswajit Das @ the prestigious three day Mukteswar Odissi dance festival hosted by the Department of Tourism of Orissa Government.
Janhabi has toured and taught workshops in many countries, including USA, Canada, Japan (Solo), Hong Kong, China, Mauritius, United Kingdom, Malaysia, Indonesia, Laos, Vietnam, Oman, and North Korea.Janhabi teaches at the Orissa Dance Academy in Bhubaneswar when she is not on tour.Janhabi Behera can be contacted by email: k_janhabi@hotmail.com
source:http://janhabibehera.com/
Janhabi Behera Profile Virasat-2014