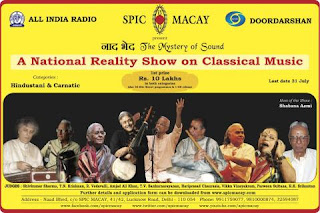 The Society for the Promotion of Indian Classical Music And Culture Amongst Youth (SPIC MACAY) has joined hands with national public broadcaster Doordarshan, to produce ‘Naad Bhed – the Mystery of Sound’, a national-level classical music reality show that aims at promoting and popularising Indian classical music and rewarding the best young practitioners of classical music.

A first of its kind in India and possibly the world, the show will go on air soon. The common format of singing competitions on TV has been around for decades and has also made stars out of middle-class Indians who can sing, dance, emote or laugh in front of the camera, all in the name of TRPs but SPIC MACAY, in the business of preserving and promoting Indian cultural heritage for 36 years, is surely not looking at finding new “singing stars”.

Even though the TRP-inducing high drama on TV and classical music are miles apart, the prospect of such a show brings about new excitement for the lovers and followers of classical music. The central idea is to earn respect for the rich Indian heritage of classical music. Those who participate or watch the show may or may not become converts to the cause but if a parent were to say with pride that their child participated in this reality show, just as he or she is doing now for other genres, then the show will have achieved its purpose.

Hoping to bring about a positive change in peoples attitude towards classical arts, SPIC MACAY and Doordarshan are putting their strengths together to launch this show. It will follow the pattern of elimination rounds familiar with Indian audiences. The proposed format is designed to attract participation from all states of the country.  DD Kendras in 15 major cities shall organise auditions followed  by shooting of the Regional Rounds which will be telecast on regional channels. Later the selected candidates from each of these 15 regional rounds shall proceed for furthering filtering to Kolkata for all Hindustani music contestants and to Chennai for all Carnatic music candidates. The grand finals shall be held in Mumbai. Both the semi-finals and finals shall be aired on the national network of Doordarshan and on its other channels including DD Bharati.

One of the strong points of this show is the USP of Doordarshan itself vis a vis its nationwide reach and its desire to promote Indian culture. The network also has an advantage because of its public service mandate to handle various logistical issues that other broadcasters cannot. SPIC MACAY founder-Chairperson, Prof Kiran Seth has also stated that the prime purpose of collaborating with DD was to attain a pan-Indian reach. He said, “There are some shows which only Doordarshan can handle, we are intending to attain the widest reach possible to have the most refined participants.”