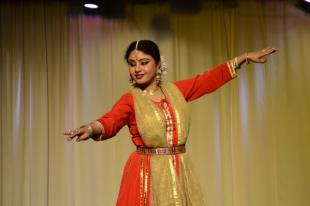 A disciple of the legendary figure of Indian classical dance, Padma Vibhushan Pandit Birju Maharaj, Mahua was enticed by the beauty of Kathak at a very early age of 5. Her first Gurus were her parents; Father, the late Shri Pradeep Shankar, and her mother, Smt. Rekha Shankar. They imbibed an undying love in her for this exquisite dance form.She persuaded her learning further from a great exponent and acclaimed guru of Kathak; Smt. Reva Vidhyarthi for about 2 years. She then joined the celebrated Kathak Kendra in Delhi and was disciple of Vaswati Mishra for another 2-3 years.
Already have collected learning from such talented Gurus, she then became the disciple of a prodigy of Indian Classical Dance - Pandit Birju Maharaj. The youngest student of his class – just 14 yrs, she was his favorite. From then on, she has been associated with him, first Learning, then Teaching as well as Performing along his side and in his group.When Birju Maharaj started Kalashram, his Dance school in 1998, she has been a devotee there, of teaching, performing and at the same time mastering this elegant Dance Form, till 2009.
Since 2009 she has been presenting as a freelance performer and her delicate dance style has impressed many a hearts both in India as well as abroad. She believes her Journey on this path of Rhythm and learning about it, is never ending and rightfully so.Awarded with the “Shringar Mani” 2007 from Sur Shringar Samsad – Mumbai . Mahua Shankar has danced, to great acclaim, in several prestigious festivals. As a young dancer, she has also had the distinction of performing in Rashtrapati Bhavan, before the then President of India, Dr. A. P. J. Abdul Kalam. Have performed with Pandit Birju Maharaj in his major productions in many prestigious festivals and has travelled extensively in India and abroad. Has to her credit dance sequences in two major films, “Gaddar” with Sunny Deol and Amisha Patel and “Devdas” with Shah Rukh Khan, Aishwarya Rai and Madhuri Dixit.