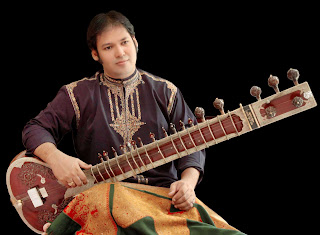 Pandit Prateek Chaudhuri, a brilliant performer, is acclaimed as one of the most outstanding Sitar players of the country today amongst the present generation. His Sitar sparkles with the rare combination of virtuosity with technical finesse and a deep sense of aesthetics. His music also reflects the eternal essence of Sitar. He has for his father, the World Renowned Sitar Maestro, Pandit Debu Chaudhuri,Padmabhushan Awardee. He also had the great fortune to learn from his Dadaguru (father’s guru), Ustad Mushtaq Ali Khan Sahab, the great legend of the “Senia” tradition, which has been named after “Mian Tansen” , the doyen of Indian Classical Music. Tansen is often called the father of Indian Classical Music and those who belong to his family and follow his tradition are called “ Senia ”. Prateek ji is the automatic successor to this rare “Senia” tradition of the great Indian Classical Music, having a unique tradition of playing the Sitar not only with the traditional and rare 17 frets ( instead of 19,20 or 21 frets, found at present), but also having a unique string arrangement of it’s own.
Prateek ji, today, strides the musical panthenon  like a young handsome Colossus. Hisgraceful style and intricate technique echo the great masters of the past. From his nimble fingers resonate, the rich tones and melodious phrases, which are characteristics of his style.  His skillful fingers handle rapidly moving passages with ease, while maintainingintegrity and beauty of every note, the mark of a true virtuoso. With each performance, he evokes masterful handling of his instrument emitting grace, fluidity and dexterity with each note.
His charming stage presence and charisma only serve to enhance the overall grandness of the performance. That being so, it must be mentioned that simplicity and clarity are the hallmark of his  style. Amongst his numerous achievements, Prateek ji has been ranked as an “A Class” Artist  by the National Television and Radio of the Govt. of India. Hismastery over the Sitar and "Laya" (rhythm) has been acclaimed and praised by the leading musicians of the country and he has also been accompanied by almost all the leading Tabla maestros, in his recitals in India and Abroad.
Special Awards & Recognitions :
Prateek ji has been awarded the reputed “Kala Ratna Award” from the Swami Haridas Sangeet Samaroha Samiti in Vrindavan, the  “Savitri Samman Award”, from Delhi,  “Sangeet Ratna Award”, from Delhi  “Jadubhatta Award ” from Kolkata “Pandit Nikhil Bannerjee Award” from Lucknow, “The Best Instrumentalist Award” from Delhi and the  “Surmani Award” from Mumbai, amongst many other Awards and recognitions. His name has also been listed amongst the prominent personalities of the World in American Biographies Intl. and Asia’s Who’s Who.
Special Concerts :
·         Prateek ji was invited to perform a very Special and Prestigious Concert celebrating the60 years of the  Indian Parliament  in the Central Hall of the Parliament of India in the year 2012 , which was attended by the President of India, Prime Minister of India, theVice President, Speaker of the Lok Sabha and the whole of the Lok Sabha and Rajya Sabha members of the Indian Parliament.
Unparalled Unique Creations
Unique Performances :
Fusion,   Cross over Music,   World Music   and   Jugalbandi (Duet)   Concerts
With his innovative ideas, also being a composer, Prateek ji received rave reviews after he  explored and experimented successfully with Fusion Concerts, World and Crossover Music, Carnatic Music and Jugalbandi ( Duet) Concerts in India and Abroad. He has given highly successful concerts with many reputed artists , forms of music and combinations with artists from various parts of the world,  which include :
·   Immensely popular Concerts : with Louis Banks,the Renowned Jazz Keyboard player and Sivamani, the famous Drummer and Percussionist from India. The name of the above group is “Rhythm Asia”  which is very much sought after.
·    Sitar with Japanese Drum players : Prateek ji performed a scintillating concert with Ryohhei and Kohei of the famous AUN group fromJapan
·    Sitar with Saxophone : He has also performed with Dave Pietro, the famous Saxophone player from New York, USA
·    He has also experimented successfully  with Carnatic musicians in India which also show his imagination in another dimension in his musical career. Another unique and rare concert performed by him was that  Prateek ji, on the Solo Sitar was accompanied by both Tabla andMridangam, a  highly successful and rare combination.
·    Prateek ji has also recently given extremely successful and sought after Jugalbandi (Duet) Concerts with his father, Pandit Debu Chaudhuri, i.e.  Duet Sitar Concerts and with many reputed artists of the country playing the  unique instruments like the Shehnai,  Sarangi , Harmonium and also theSarod. These concerts also had an overwhelming response and won the hearts of the audience.
Countries performed all over the world :
He has toured extensively throughout the world with his father as well as a solo artiste. These include countries like  United States of America, Canada, England, New Zealand, France, Greece, Germany, Holland, Austria, Belgium, Japan,  China, Italy,  Hong Kong, Malaysia, Singapore, Mexico, Morocco, Denmark,  Norway, Sweden, Switzerland, Yugoslavia (before partition), , Indonesia, Venezuela , Turkey, Syria,  just to name a few. Prateek ji is also the first Sitarist to visit and perform in countries like Bosnia (after partition of Yugoslavia) and even in Latin American countries like Columbia, Guatemala and Panama.
Academic excellence :
Prateek ji  has also excelled in each stage of his education. He is the recipient of the Gold Medal for his M.A. (Music), while he has also secured the first position in M.Phil (Music) examinations and is Ph.D (Music) i.e a Doctrate from the University of Delhi. At present, he not only performs all over the world, but also teaches as an Associate Professor at the Faculty of Music of the University of Delhi, India, thus being aunique and rare combination of an eminent performer and  teacher together in one , which is  very  hard to find.
Besides his innumerous performances all over the world, Prateek ji has also conducted several Workshops and also given several Lecture-Demonstrations in India and Abroad for students and musicians  in many countries.
Special Mention :