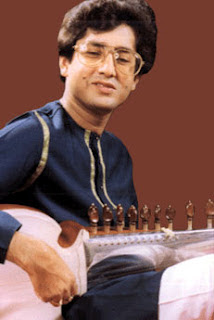 Partho was born in 1960, and started his musical training under his father who was a disciple fo Pandit Radhika Mohan Moitra. Partho then took lessons for nearly a decade from Ustad Dhyanesh Khan- son and disciple of the legendary Sarod maestro Ustad Ali Akbar Khan. Since 1980, Partho has been under the direct guidance of Bharat Ratna Pandit Ravi Shankar, India's greatest musician.
Partho Sarathy is one of the finest classical musicians from India and a disciple of the legendary Pt. Ravi Shankar. His music embodies the true heritage of Hindustani raga music. His virtuosity on the sarod makes his exploration of ragas an exercise in harmony, tranquility and his serious meditative approach makes his music literally soar to unscaled height of fulfillment. Partho is based in Calcutta, the cultural mecca of India and has been performing for the last 30 years in India and all over the world.
Blessed with an exceptional artistic temperament, exacting technical precision and a rare aesthetic sensibility, Partho Sarothy is considered one of the most engaging, intelligent and talented instrumentalists in contemporary Hindusthani music. These qualities, which he conjures up on the sarod with such ease, have so far earned him an international reputation of considerable distinction.
Born in 1960, Partho displayed a tremendous aptitude and natural talent for music from a very early age. This potential was promptly recognized by his father, the late Sudhamoy Chowdhury, a disciple of the late, great sarod maestro Pandit Radhika Mohan Moitra, who took special care to seriously initiate the young Partho into Hindusthani music.
For nearly a decade after this he was closely groomed and tutored by Ustad Dhyanesh Khan - the son and disciple of the legendary sarod player Ustad Ali Akbar Khan. This solid foundation enabled Partho to be accepted whole-heartedly as a disciple by Bharat Ratna Pandit Ravi Shankar, who since 1980 has provided intensive and continuous training and guidance to him, including substantial periods staying in his guru's house.
Panditji has produced many students over his illustrious career, yet few display the depth of knowledge that Partho has received. Even at this relatively young age, Partho has had extensive performance experience over the last two decades. As a soloist he has performed all over Europe and the USA. In India he is regularly invited to perform in major prestigious festivals such as the Dover Lane Conference and S.R.A Festivals in Calcutta, The Sawai Gandharva festival in Pune, the IMG Festival, Mumbai, Music Academy Hall in Chennai the Shankarlal Festival in Delhi amongst many others. He also regularly tours with his guru Pandit Ravi Shankar in India and overseas, which have included programs in the Festival Of India in U.S.S.R at Kremlin, the Royal Albert Hall and Royal Elizabeth Hall in London.
His recognition as a major artist is firmly grounded in his deep understanding of the classical style. His masterly conception of the grand design and architecture of the rag, faithfully inherited from his guru, has enabled him to innovate within the instrumental form, and this is especially evident in his creative approach to, and precise articulation of jod, ang and tarparan. All these promises that Partho has a bright and illustrious musical future, and Hindustani Music has a very worthy artist to nurture and carry on its illustrious tradition.