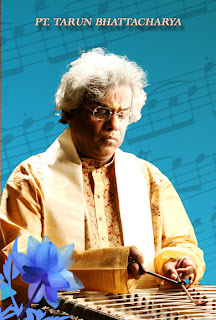 Pandit Tarun Bhattacharya
India’s Global Music Ambassador
Santoor Maestro Pt Tarun Bhattacharya has been a pioneering and revolutionary musician who has changed the face of Indian classical music, he has been truly an unparalleled music ambassador of India. One of the most celebrated torch bearers of Indian classical music he has virtually traversed the globe many times over performing in some of most awe inspiring venues and cities as Royal Albert Hall, Palace-de-beaux (Brussels), Theater- De-La-Viile (France), Apollo Theatre (Spain), Jubilee Auditorium (Canada), Kremlin (Russia). The mesmerized list of admirers include Prince Charles, George Harrison, Paolo Solaris and many more of respected figures across the Globe.
The famous Maihar Gharana’s only Santoor Maestro, Pandit Bhattacharya has revolutionized Santoor, the instrument, as well as it’s style of play. He displayed for the first time ever (1980) that one could 'meend' or glide notes at the lower octave in a hammered instrument like Santoor. The champion maestro changed the art of playing santoor for ever.
Maestro Tarun Bhattacharya is the inventor of "mankas" or fine tuners that help in the tuning of this 100 stringed instrument fast, with a long lasting effect and a very high degree of accuracy. His innovative techniques of playing the Santoor also facilitates in the playing of "Krintans, Ekharatans, Boltans" broadening the utility of the Santoor in various traditional art forms. Hisimprovisations on the shape and string arrangements have resulted in deeper and more classical sound for the Santoor. Maestro Tarun Bhattacharya is recognized the world over for his wizardry in Ragdari, as well as, Layakari (mathematical calculations) and plays music that touches the inner soul.His Santoor thrills all his listener transcendingcountries, cultures, gender, religions and age. He is one of the few contemporary classical musicians who reach out to Connoisseurs and the general public as he has been to able to adapt to the changing times despite keeping to the classical genre of music.
Maestro Tarun Bhattacharya has released over 100 CDs and Cassettes. He has been the recipient of numerous felicitations like pre Grammy nomination in 97, excellence in world music USA, and his CD "Kirwani" has been acclaimed as the top 10 in the world. Pt. Bhattacharya received his talim (music instructions) from his father Pt. Rabi Bhattacharya, Pt. Dulal Roy and finallyfrom the great Bharat Ratna Pt. Ravi Shankar. He is Rotary International’s Global Ambassador for Peace & Goodwill.Maestro Tarun Bhattacharya is also a Visiting Professor at the Nupur Dance Academy, USA.
More Details
नमस्कार,अगर इसजीवन परिचयमें आपकोकोई कमीया कोइनई बातजोड़नी/घटानीहो तोअछुती इसपेज कालिंक विषयलिखते हुए  हमें इस पतेपर ई-मेल करिएगा.ताकी हमइसे अपडेटकर सकें-सम्पादक
Classical Art Pt.Tarun Bhattacharya