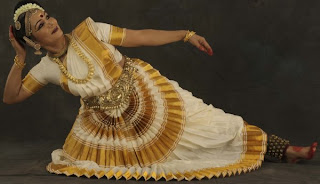 Prof. Kalamandalam Leelamma is one of the foremost exponents in Mohiniyattam.She is a first-rate performer, choreographer and excellent teacher.Prof. Kalamandalam Leelamma represented Kerala in many national and international dance festivals held under the last three decades.Her research in Mohiniyattam is outstanding. She has innovated more than 80 new steps (Adavus) for Mohiniyattam and choreographed around 100 new items, various padams, poems and dance drama for different occasions. She is also experimenting on a new choreography style adopting her new Adavus.She performed in different films like in “Dance d’enchatress” directed by the famous Adoor Golapa Krishnan and in “Nirmalayam” directed by M.T. Vasudevan Nair (which got Swarna Kamal, Pdt of India.)
Prof. Kalamandalam Leelamma one of the foremost Mohiniyattam exponent of , hails from Kottayam district in Kerala. She joined Kerala Kalamandalam as a student at an early age and completed Mohiniyattam, Kuchipudi and Bharatanatyam course with distinction. Before joining Kalamandalam she had lessons in semi classical dance under a local guru.She had her intensive lessons in Mohiniyattam, Bharatanatyam and Kuchipudi under Kalamandalam Chandrika. Her academic career was recorded in high grade.After studies she joined Kalamandalam as a teacher. Even in the days of her studies she has been known as one of the best dancers among contemporaries in the dance troupe in Kalamandalam. She specialised in Mohiniyattam and had conducted research studies and is still continuing. She represented Kerala in many national and international dance festivals held under the last three decades. Excellence in facial expressions, well disciplined in Karanas and innovations in her approach to art, Leelamma reflects at large the strength of tradition and grace of classical simplicity in Mohiniyattam. She had her senior fellowship from the Cultural Department, Govt. of India in the field of Mohiniyattam. Her topic was “New styles in Mohiniyattam introducing compositions other than the generally accepted ones”.
Her research in Mohiniyattam is outstanding. She innovated more than 80 new steps (Adavus) for Mohiniyattam and subdivided and classified all the steps in Mohiniyattam. It is the first attempt by any Mohiniyattam dancer in the history of Mohiniyattam. Prof. Kalamandalam Leelamma choreographed around 100 new items, various padams, poems and dance drama for different occasions and all are performed in and outside the Country. A book on the New steps and old incorporating all prevailing steps and history of Mohiniyattam is finished and is going to be published by Kerala Kalamandalam. Now she is concentrating in performing new padams and varnams by contemporary poets in the classical style. After her work as the Head of Department of Dances and Professor in Kerala Kalamandalam (1997-2007), the pioneer institution of classical dances in the world, she is now working as Dean in the same faculty of the .
Awards
Panel Member of ICCR (Indian Council for Cultural Relations) for performing Mohiniyattam outside
Award from Kerala Sangeeta Nataka Akademi, Govt. of Kerala in 1990 for her outstanding contribution in Mohiniyattam.Senior fellowship in Mohiniyattam from the cultural Dept. Govt of India in 1997 on new composition in Mohiniyattam Functioned as Director of the Dance festival held in , organised by ARTA the official organ of cultural events for French government in October 1999.Natya Mohini title by the Kunchan Nambiar Smaraka govt. of Kerala in 2003 for her outstanding transcreation of “Kalyana Sougandhikam Thullal” in to Mohiniyattam format, the maiden event in the history of Mohiniyattam and Thullal.
Natya Sree title by Kaladarpanam, Ernakulam for her outstanding contribution to Mohiniyattam for the last 3 decades.Performed Mohiniyattam in U.K. (Great Britain) in 1990 organised by Kalachetana for consecutive 3 months in different stages in Britain. Again in 1991 performance in Britain.Performed Mohiniyattam in Gulf countries during 2000 and 2003 in Bahrin, Doha, Kuwait and Mascot.Participated almost all major Dance festivals of India, representing Kerala and Kerala Kalamandalam since 1974.
Worked as Reader of Dances in the Dept. of Fine Arts during 1995-1997 in Sree Sankara Sanskrit University, Kalady, Trivandrum Regional Centre.Expert member of Dances of the following Universities:
Also the Member of Board of Studies in the above Universities since 1997 and continues.Expert member of the selection Board for young dancers aparting Scholarships by Cultural Dept. of Govt of India Professor and Head of the Dept. of Dances Kerala Kalamandalam Cheruthuruthy from 1997 till 2007.Functioned as the Hon. Director of the first National Seminar in Mohiniyattam Conducted by Swathichitra, Trissur, the Sole Institution for Research in Mohiniyattam of the Country for 7 days in may 2001.Expert member of Doordarsan for selecting dancers and aparting Title Grads to the Artists.Recently, considering her proficiency in the field of Mohiniyattam.Directorate of Doordarsan/New Dehli has produced a CD in Mohiniyattam incorporating her excellent performance.2007: Award from Kerala Kalamandalam for her great work as Professor and Head of the Dept. of Dances Kerala Kalamandalam, as same for her great involvement for Mohiniyattam.
नमस्कार,अगर इस जीवन परिचय में आपको कोई कमी या कोइ नई बात जोड़नी/घटानी हो तो अछुती इस पेज का लिंक विषय लिखते हुए  हमें इस पते पर ई-मेल करिएगा.ताकी हम इसे अपडेट कर सकें-सम्पादक
Classical Art Kalamandalam Leelamma