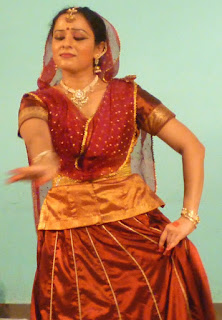 Kathak Guru Monisa Nayak is an accomplished Kathak performer of the Jaipur Gharana who has dedicated herself to perfecting her art form. Her excellent command of rhythm, as well as her natural flair for profound expression, mark her performances and are critically acclaimed by connoisseurs.She has been honoured with National Award 'Ustad Bismillah Khan Yuva Puraskar' of and Sanatana Nritya Puraskar in recognition of her achievements, versatility and dedication to the art form. A disciple of Pandit Rajendra Gangani, and a Post Graduate from National Institute Kathak Kendra,   and an A- Grade artiste of Delhi Doordarshan, Monisa is an empanelled artiste of the ICCR, Govt. of India. She has performed widely in major festivals within and outside the country. Presently Monisa is teaching at Gandharva Mahavidyalaya,.
Kathak....
Kathak is said to have originated in the temples of before finding its way into the royal courts of Awadh and Jaipur. Known as the dance of story tellers, Kathak comes from the word Kathakaar – the village minstrel who used subtle gestures and movements to enhance the dramatic element of the narrative. The narrative was most often from mythological legends.During the Mughal period, artistes served in courts for royal entertainment. It is during this time that the dazzling court Kathak, with its exotic costumes, Persian influence and intricate footwork, developed and flourished.This graceful and spontaneous dance form reveals the poetry, mythology and spiritual ethos of its roots and also, importantly, ’s rich Hindu-Muslim heritage. It is, of all the classical dance styles of the country, pre-eminently the one which renders tala, or the rhythmic aspect, as a central focus in its repertoire.
recognitions
•           Honoured with National Award 'Ustad Bismillah Khan Yuva Puraskar 2009' of for notable achievements in the field of Kathak dance.
•           Awarded Sanatana Nritya Puraskar from Sanskriti Pratishthan for versatility and dedication to the art form.
•           'A' Graded Kathak Artiste at Doordarshan Kendra, .
•           Empanelled by the ICCR in their Reference Panel of Artistes.
•           Received Sanskriti-Kalakriti Fellowship for the year 2006-2007 for research in the field of Kathak Choreography.
•           Bestowed with the title 'Sangeet Kala Ratna' at the Guru Poornima Mahotsava.
National Talent Search Scholarship in Kathak by CCRT, Govt of .
नमस्कार,अगर इस जीवन परिचय में आपको कोई कमी या कोइ नई बात जोड़नी/घटानी हो तो अछुती इस पेज का लिंक विषय लिखते हुए  हमें इस पते पर ई-मेल करिएगा.ताकी हम इसे अपडेट कर सकें-सम्पादक
Classical Art Monisa Nayak