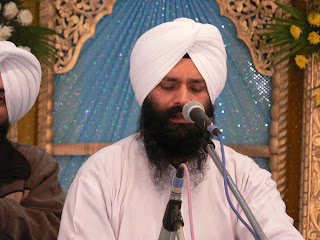 Ustad Bismillah Khan Yuwa Samman Awarded Prof. Alankar Singh has been working as Asst. Professor of Music (Vocals) in , . He started learning music at the tender age of four years. He received training in Classical (Vocals) Music and Gurmeet Sangeet under Guru Shishya Parampara, continuously for about eleven years from Gurmat Sangeet Acharya Late Professor Tara Singh Ji, a renowned musicologist and composer, who belonged to tradition of Khayal Gayaki.He is taking trainning od Indian Classical music from Guru Ganesh Prasad Sharma of Ilahbad for last twenty years.He was selected under the Cultural Talent Search Scholorship Scheme by the Center for Cultural Research and Training, Government of India, in the field of Classical (Vocal) Music and got National Scholorship during 1985 - 1993.
Besides being an expert in Notation, Music Composer and Music Arranger, Alankar Singh is an approved artist of All India Radio and Doordarshan for Classical Music, Shabad Gayan, Bhajan, Geet and Ghazal singing.Alankar Singh has given more than 300 public performances of Gurmat Sangeet and Classical Music. He has the privilege of performing at four  Takhats of Khalisa Panth. based Channel Punjab did video recording of 13 Shabads in prescribed Ragas in 2006 & 2007 and has been regularly telecasting these since then in