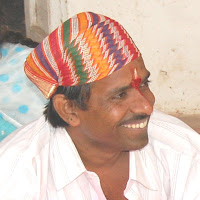 Studio Address: Mohan Terracotta Art, Village & Post Molela,Via. Khamnor, Dist. Rajsamand - 313322, , . Telephone & Fax : 00 91 2953 285109 Email;dineshmolela@yahoo.co.in Availability: Studio is open from 9am to 7pm every day.Directions: My studio is located about 45 KM north of Udaipur,(India).Udaipur is well connected by Air, Rail and bus services from New Delhi & Mumbai, which are major cities of India.
Current Work
For fifteen generations dinesh chandra Kumhar's family have practised the tradition of making terracotta plaques of traditional Hindu Deities. Molela is known in the area as a 'potters village' as there are about 30 families from the Kumhar caste producing pottery. It produces a range of pottery goods , from devotional plaques to large panels depicting rural village scenes and smaller items such as temple hand bells and domestic ware. Work is available mainly from the village.
Technical Information
Two local clays are used - Nada, a coarse black clay with a high sand grog and Alu, a finer gray clay used for throwing. The two clays are mixed together in equal parts with the addition of 20% dried and sifted donkey dung, which helps to disperse the heat through the plaque and lesson the thermal shock during firing.
Dinesh wedges the clay with his feet, then kneads it by hand into a round ball ready for use. In the courtyard of his work shop he works on the floor, which has been dusted with dung. The clay is flattened and smoothed with a bevelled wooden tool into a slab 15cm thick.
Then chandra Kumhar cuts out the shape of the plaque, assembling the top pelmet and sides, adds a coil of clay to form the outline of the horse on which Durga is mounted, then onto the outline pinches its body, following which the figure of Durga astride the horse is created in the same way. Then he moves to the finer details and finally adds the filials. the whole process takes an hour and a half. After drying in the open air the plaques are fired in an Awara, a circular open kiln, constructed from brick. it is 1.5m high and 2.0m in diameter. The work is loaded onto steel bars that are supported on brick peers leaving a 60cm fire chamber below. Up to 30 panels are fired at once and the kiln is sealed by 3 layers of pottery shards and fired for about 6 hours at 600-700 degrees centigrade. (extract from Ceramic Review Issue 213)
History
Dinesh chandra Kumhar's family has lived in the small town of , fifty km. north of in southern Rajasthan for the past 15 generations. Under the guidance of his father, Dinesh began his apprenticeship at the age of 10. He was born in 1969.He has visited many parts of the Country demonstrating and showing his work.His work is in many national collections in and also Internationally.
He father won the Nation Award (1988 - 1989) and Rajasthan State Award for Master Craftsmen 1983 - 1984 for terracotta. He has visited many parts of the world demonstrating and showing his work, including (1991), (1988), the (1986)and Span(2004).He has shown work at the Australia College of Advance Education, Australia and demonstrated at the Mangi International Museum La Jolla .
नमस्कार,अगर इस जीवन परिचय में आपको कोई कमी या कोइ नई बात जोड़नी/घटानी हो तो अछुती इस पेज का लिंक विषय लिखते हुए  हमें इस पते पर ई-मेल करिएगा.ताकी हम इसे अपडेट कर सकें-सम्पादक
Dinesh Chandra Prajapat Folk Art