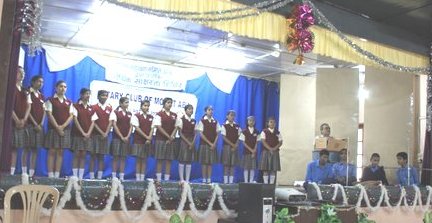 The promotion of ozone friendly products; special programs and events on saving the ozone layer; the distribution of the UNEP's   public awareness posters to be used for events centered on the International Day for the Preservation of the Ozone Layer; and the distribution of awards to those who worked hard to protect the earth's ozone layer.Music Video “Sher Se Jungle” set the mood of the meet followed by the documentary “An Inconvenient Truth” part two by El Gore. PFA Mount Abu& Rotary Club Mount Abu at Sophia High School with virtually all the other schools attended to it with concerned commitment, as prescribed by UNO. With every passing year a step further has been taken in this regard. If in past many attendees including the concerned members of Inner Wheel Club Mount Abu forsake use of aerosols, this year the ACJM Mount Abu Mr. Neeraj Kumar Bhardwaj RJS, came forward to educate oaneand all regarding the legal aspect of environment protection with his Environment Advocacy Handout.
His was a very lucid deliberation made simple fro the students from virtually all the schools of Mount Abu together with members of Bharat Scout. While speakers from AdarshVidya Mandir, Kendriya Vidyalay, St. Joseph School and St. Mary’s informed the erudite, attentive young minds about the various aspects of World Ozone Day, the visually challenged from NBA – PNM,Rehabilitation Centre, Mount Abu offered meaningful, lilting songs forthe occasion. The talented girls of Sophia choreographed the rendering by the visually challenged. As always, standing beside PFA Mount Abu,the president of Rotary and Hotel Association Mr. Kashyap Jani gavethe vote of thanks.