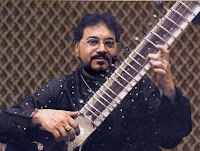 Kushal Das was born in Kolkata and received his first lessons on the sitar from his father, Sri Sailen Das, and his uncle, Sri Santanu Das, in 1959. He deepened his studies later under the guidance of Prof. Sanjoy Banerjee and Pandit Ajoy Sinha Roy.
In order to accomplish a more profound understanding of Raga interpretations he takes additional vocal lessons with Pandit Manas Chakraborty and Sri Ramkrishna Basu.
Kushal Das is a "grade A musician" at All India Radio and Doordarshan - the leading media regarding classical Indian music in India itself.
Since 2002 Kushal Das also plays the Surbahar in addition to the Sitar.

Banerjee and Das provoked a stronger and stronger suction effect ... In the Raga lasting more than an hour the musicians animated themselves to ever increasingly ludicrous, raging play. - FAZ, May 10th, 2000
Kushal Das elicited from his Sitar enchanting melodies, characterized by subtle and subtlest nuances of rhythm and dynamics of constantly newly invented colourations of the distinctive, twanging sound of the Sitar. Playfully virtuously his fingers glided over the strings, sometimes so fast that to the naked eye they were merely visible as shadows. - Elbe-Jeetzel-Zeitung, December 13th, 1999
The musician, born in 1959 in Calcutta, since long ago ranks among the great artists in his home country. - Weser Kurier, November 11th, 2000
Classical Indian music with Kushal Das on the Sitar ... Without big bang effects but traditional indian music effective in its modesty. - Szene Hamburg, November 2000