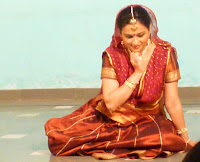 Monisa is an accomplished Kathak performer of the Jaipur Gharana who has dedicated herself to perfecting her art form. Her excellent command of rhythm, as well as her natural flair for profound expression, mark her performances and are critically acclaimed by connoisseurs.

A disciple of Pandit Rajendra Gangani, and a Post graduate from the national institute – the Kathak Kendra,  and an A- Grade artiste of Delhi Doordarshan, Monisa is an empanelled artiste of the ICCR, Govt. of India. She has performed widely in major festivals within and outside the country. In recognition of her prodigious talent, versatility and dedication to the art form, she has been awarded the Sanatana Nritya Puraskar. Presently Monisa is teaching at Gandharva Mahavidyalaya,New Delhi.Kathak is said to have originated in the temples of before finding its way into the royal courts of Awadh and Jaipur. Known as the dance of story tellers, Kathak comes from the word Kathakaar – the village minstrel who used subtle gestures and movements to enhance the dramatic element of the narrative. The narrative was most often from mythological legends.During the Mughal period, artistes served in courts for royal entertainment. It is during this time that the dazzling court Kathak, with its exotic costumes, Persian influence and intricate footwork, developed and flourished.

This graceful and spontaneous dance form reveals the poetry, mythology and spiritual ethos of its roots and also, importantly, ’s rich Hindu-Muslim heritage. It is, of all the classical dance styles of the country, pre-eminently the one which renders tala, or the rhythmic aspect, as a central focus in its repertoire.
·  'A' Graded Kathak Artiste at Doordarshan Kendra, New Delhi.Awarded Sanatana Nritya Puraskar from Sanskriti Pratishthan for versatility and dedication to the art form.Empanelled by the ICCR in their Reference Panel of Artistes.Received Sanskriti-Kalakriti Fellowship for the year 2006-2007 for research in the field of Kathak Choreography.
·  Bestowed with the title 'Sangeet Kala Ratna' at the Guru Poornima Mahotsava.
National Talent Search Scholarship in Kathak by CCRT, Govt of .
·  Presented Kathak choreography “Nartan" in Ananya Festival, depicting the historical development of Kathak (against the backdrop of the Purana Qila, New Delhi).Choreographed group-production “Raga-chitra”  depicting the moods of various ragas, for 11th National Choreography Festival, Impresario.Blending the aesthetics of tradition with modern fusion music, she has created a choreography "SPECTRUM" relating colours to sentiments.Choreographed dance choreography on the theme of 'KABIR' at Lucknow Mahotsava.
·  She conducted Kathak dance workshop at Kota, Rajasthan sponsored by SPIC-MACAY for spreading her Art form and to create awareness among children towards classical heritage.Monisa has rendered some of the poems of Rabindranath Tagore under the direction of Smt. Madhavi Mudgal as a solo and duet (with Odissi) for the Tagore Festival, India International Centre, New Delhi.As part of a mission to promote Classical Art in rural areas, she presented Lec-Dems in Gondia and Panna district for enriching tribal youth.
·  She has also combined her dance experimentally with other art forms like fashion design, retaining, all through, its classical vocabulary. To depict the moods of rain created a fusion of traditional Kathak with fashion show executed by designers Ashima-Leena.
Aditya Gupta ARTISTE PROFILES Classical Art Kathak MONISHA NAYAK