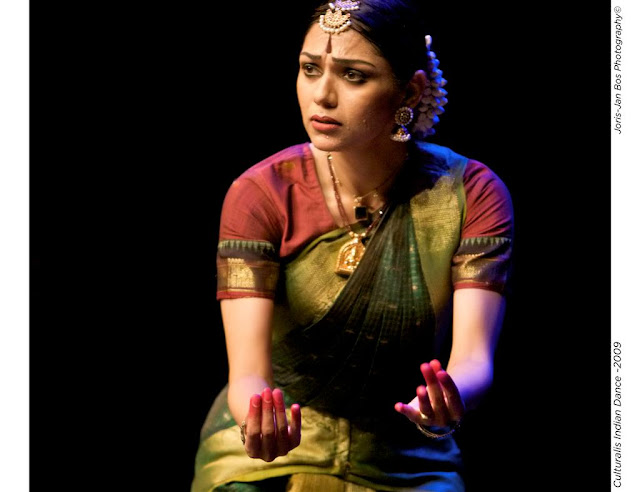 Rama Vaidyanathan is one of India's leading classical dancers. She is considered as one of the best interpreters of the ancient art form of Bharata Natyam. She has been fortunate to have trained intensively under the legendry dancer Yamini Krishnamurty. Rama has also been under the guidance of the eminent Guru Saroja Vaidyanathan.

Everyone who has seen Rama perform is struck by her unique thought process and fresh approach to dance. While deeply routed in tradition She has evolved her own individual style without forsaking the core principles of Bharata Natyam.
Rama has been performing professionally for the past twenty years and is one of the most sought after dancers of her generation. She brings to her dance a rare sense of devotion and dedication, which leaves the audience with a sense of spiritual fulfilment.
Bharata Natyam is one of the oldest dance forms of India. It was nurtured in the temples and courts of southern India since ancient times. Later it was codified and documented as a performing art in the 19th century by four brothers known as the Tanjore Quartet whose musical compositions for dance form the bulk of the Bharata Natyam repertoire even today. The art was handed down as a living tradition from generation to generation under the Devadasi system under which women were dedicated to temples to serve the deity as dancers and musicians forming part of the elaborate rituals. These highly talented artists and the male gurus (nattuvanars) were the sole repository of the art until the early 20th century when a renewal of interest in India's cultural heritage prompted the educated elite to discover its beauty. By this time the Devadasis had fallen upon evil days due to lack of state patronage and changed social mores. The revival of Bharata Natyam by pioneers such as E Krishna Iyer and Rukmini Devi Arundale brought the dance out of the temple precincts and onto the proscenium stage though it retained its essentially devotional character.
Today Bharata Natyam is one of the most popular and widely performed dance styles and is practiced by male and female dancers all over India. Due to its wide range of movements and postures and the balanced melange of the rhythmic and mimetic aspects lends itself well to experimental and fusion choreography. Degree and Post Graduate courses covering the practice and theory of Bharata Natyam as well as the languages associated with its development are available at major universities of India.
Rama has been performing for the last two decades. She has been featured in all the major national and international festivals including Government of India's Indian Council for Cultural Relations; National Academy for music, dance and drama - Sangeet Natak Akademi; National Television channels; Indira Gandhi Centre for the Arts (IGNCA); Delhi Govenment's Sahitya Kala Parishad and for various State Governments and other reputed cultural organisations such as The Madras Music Academy, Chennai; Krishna Gana Sabha, Chennai; Kalamandalam, Cheruthuruthy, Kerala; Ahilya Fort, Maheswar and many others.
Rama has also performed for International conferences such as The World Sanskrit Conference, Special Charity performances for The Cancer Society, Water Festival of the IIC and for The Red Cross Society. She also performed at the opening of the Indian Film Festival in Madrid, Spain in May 2006 and Samudra Festivals in the Gulf Countries.
Her concerts at prestigious International platforms such as the Bozar, Bruselles; Smithsonian, Washington DC., USA; Tropen Theatre, Amsterdam, The Netherlands; Espace Julien, Marseille, France; Minon, Tokyo, Japan; Du-Store-Verden, Oslo, Norway; Theatro-Juarez, Guanohato, Mexico; Edinborough and Brigton Festivals, UK and recently in Moscow and St.Petersburg to celebrate 60 years of friendship between the Indian and Russian Governments were all received with critical acclaim.
सादर,
स्पिक मैके के लिए
माणिक
आकाशवाणी ,स्पिक मैके और अध्यापन से जुड़ाव
http://apnimaati.blogspot.com
http://spicmacaychittorgarh.blogspot.com
http://facebook.com/manikspicmacay
http://twitter.com/manikspicmacay
चित्तौडगढ भरतनाट्यम सैनिक स्कूल